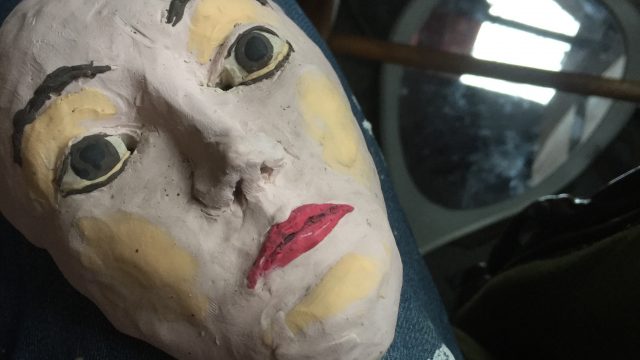 Familiar Machines presents mechanisms of power and feminine governance through practices that uncover modes of production using raw materiality and the body. The exhibition explores different modes of digital or ‘mechanical’ manipulation; both of the female body and through the challenging of patriarchal systems by encouraging social disobedience as a form of protest… 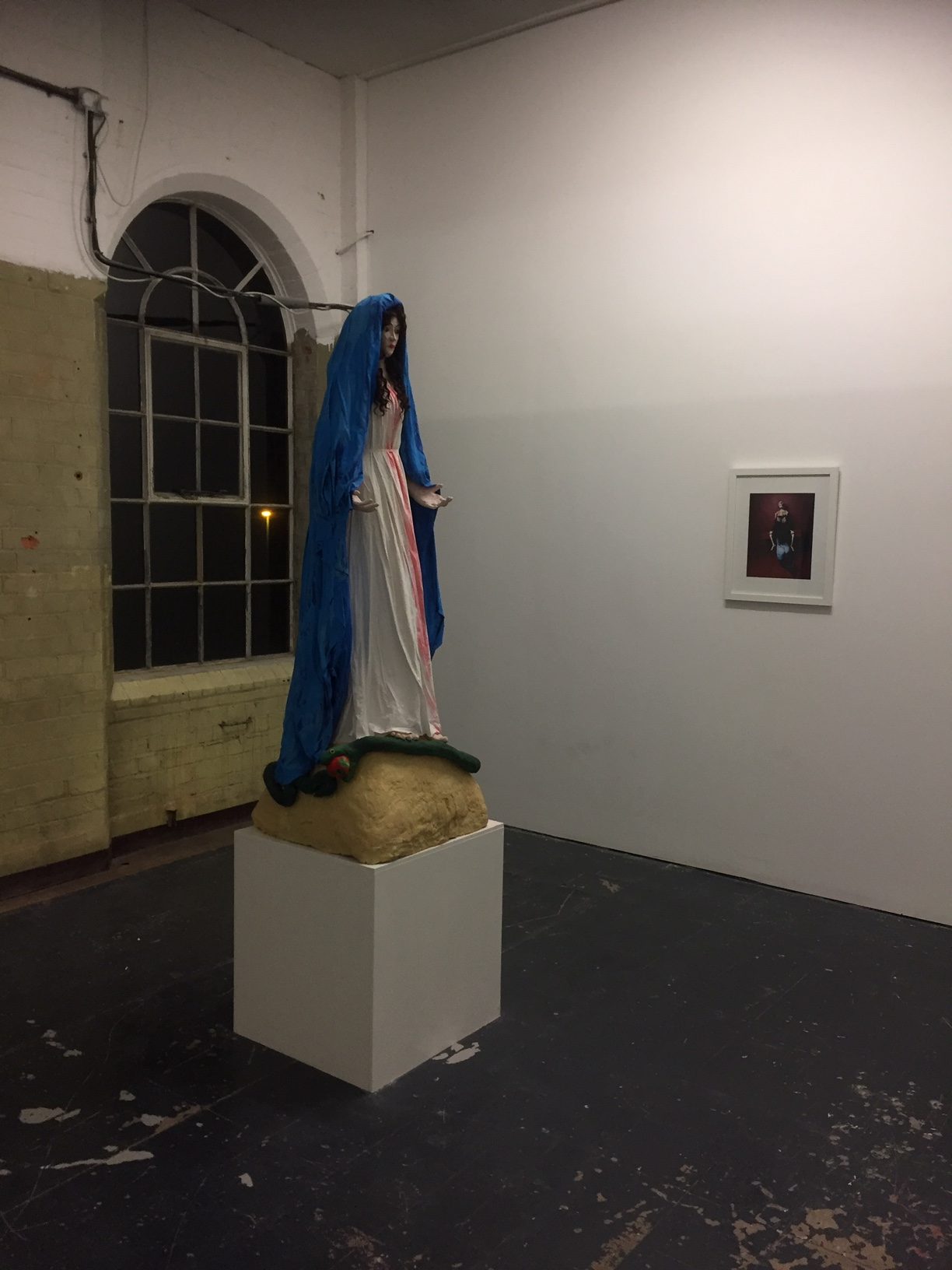 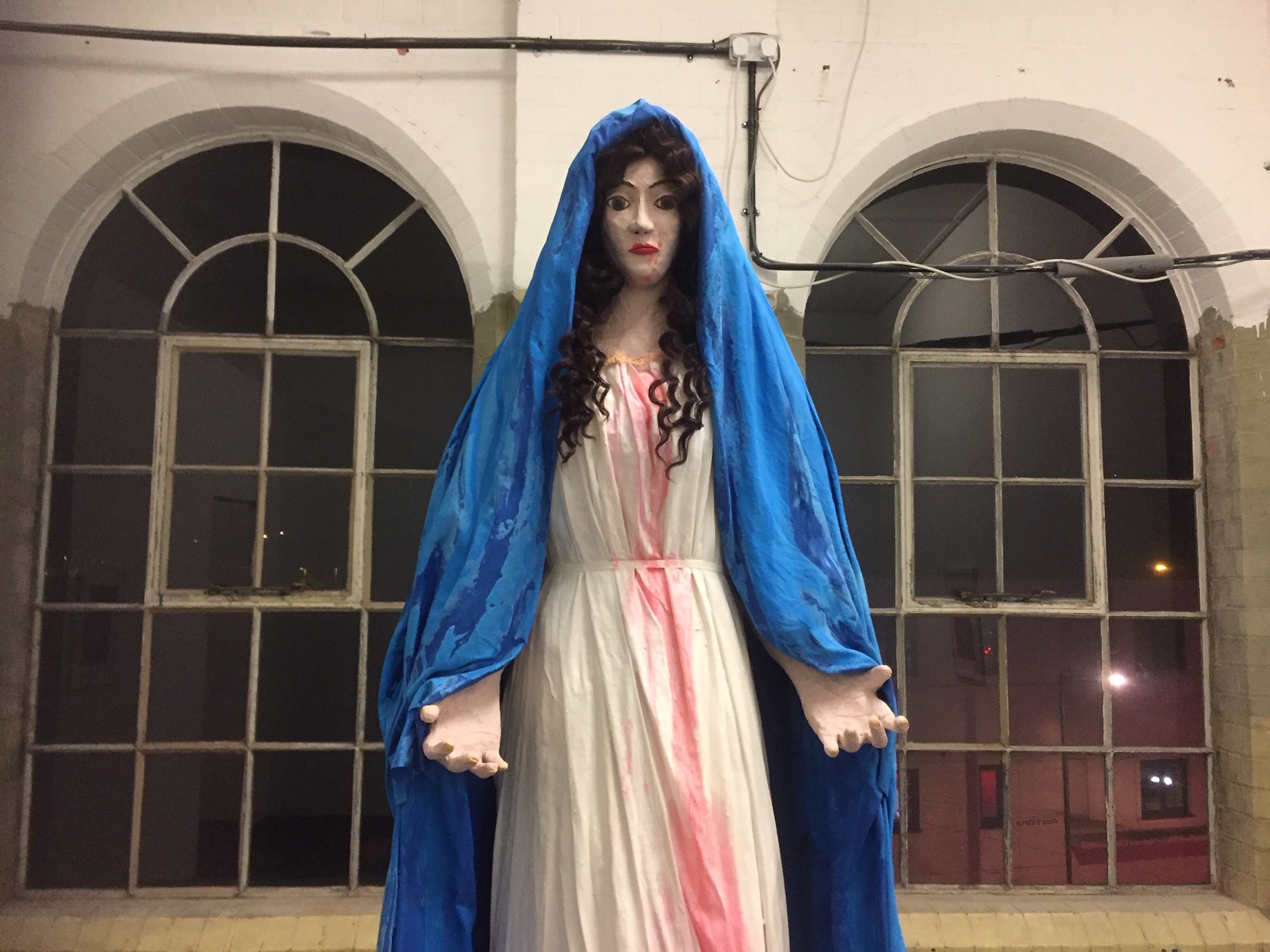 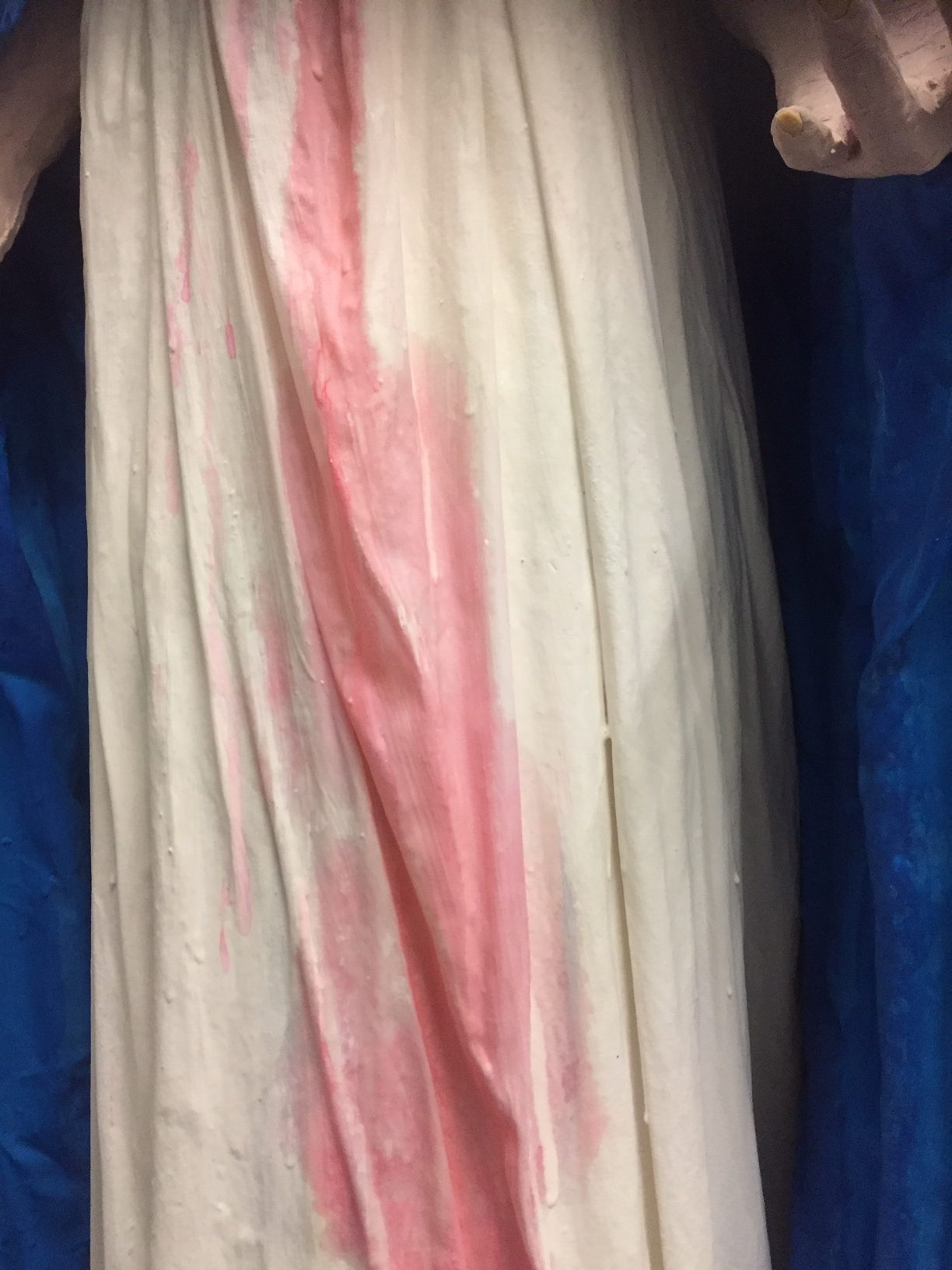 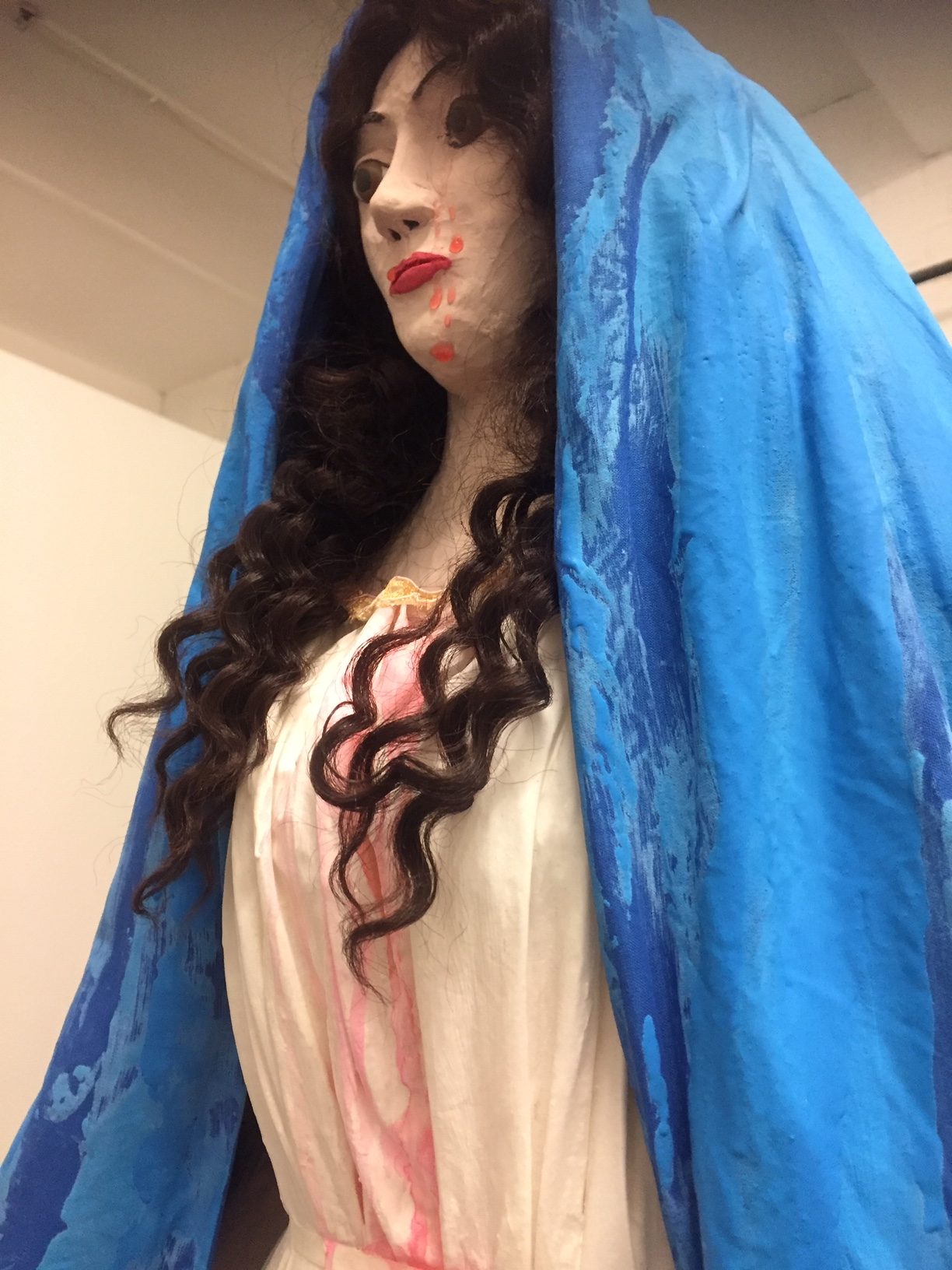 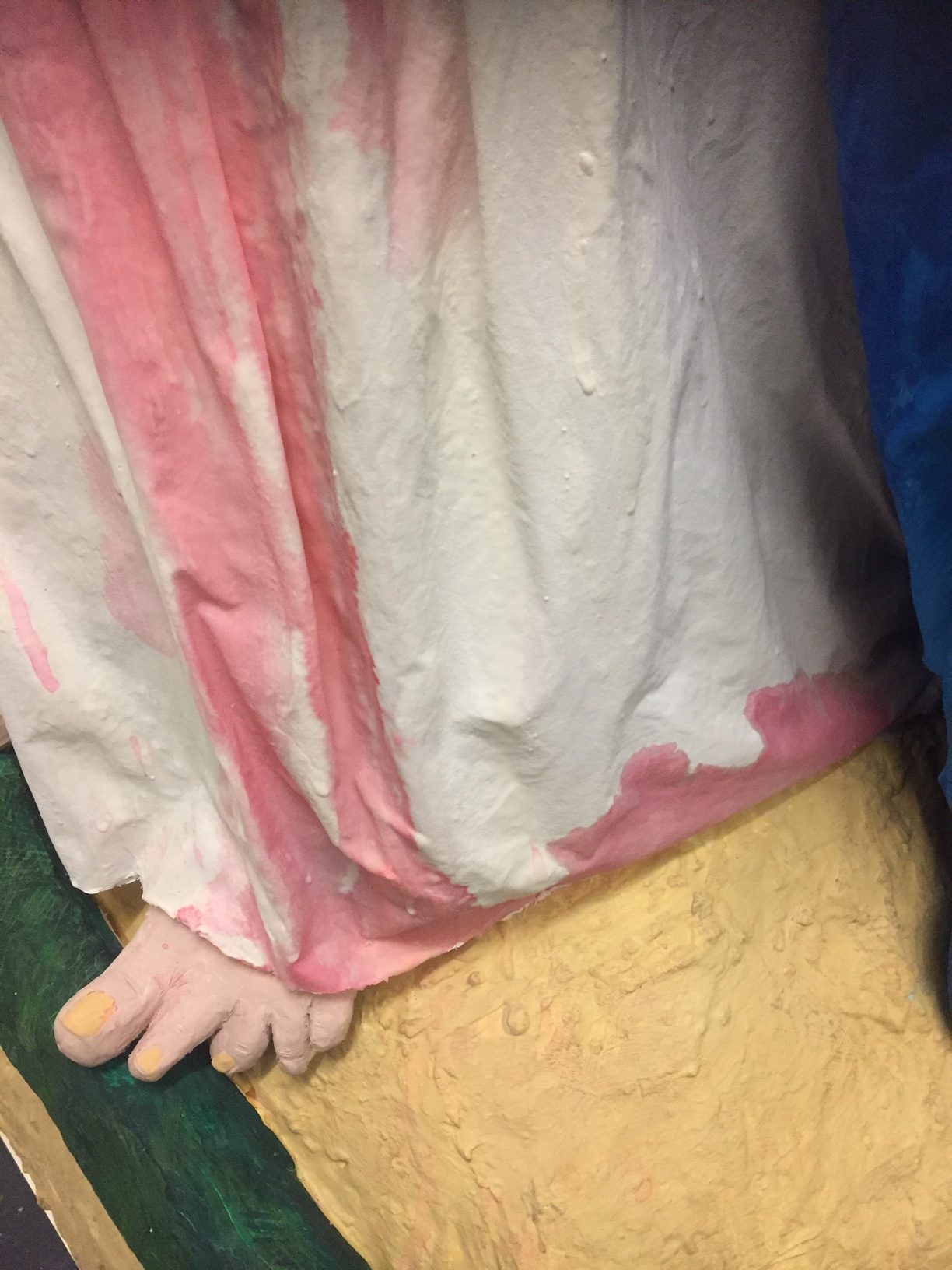 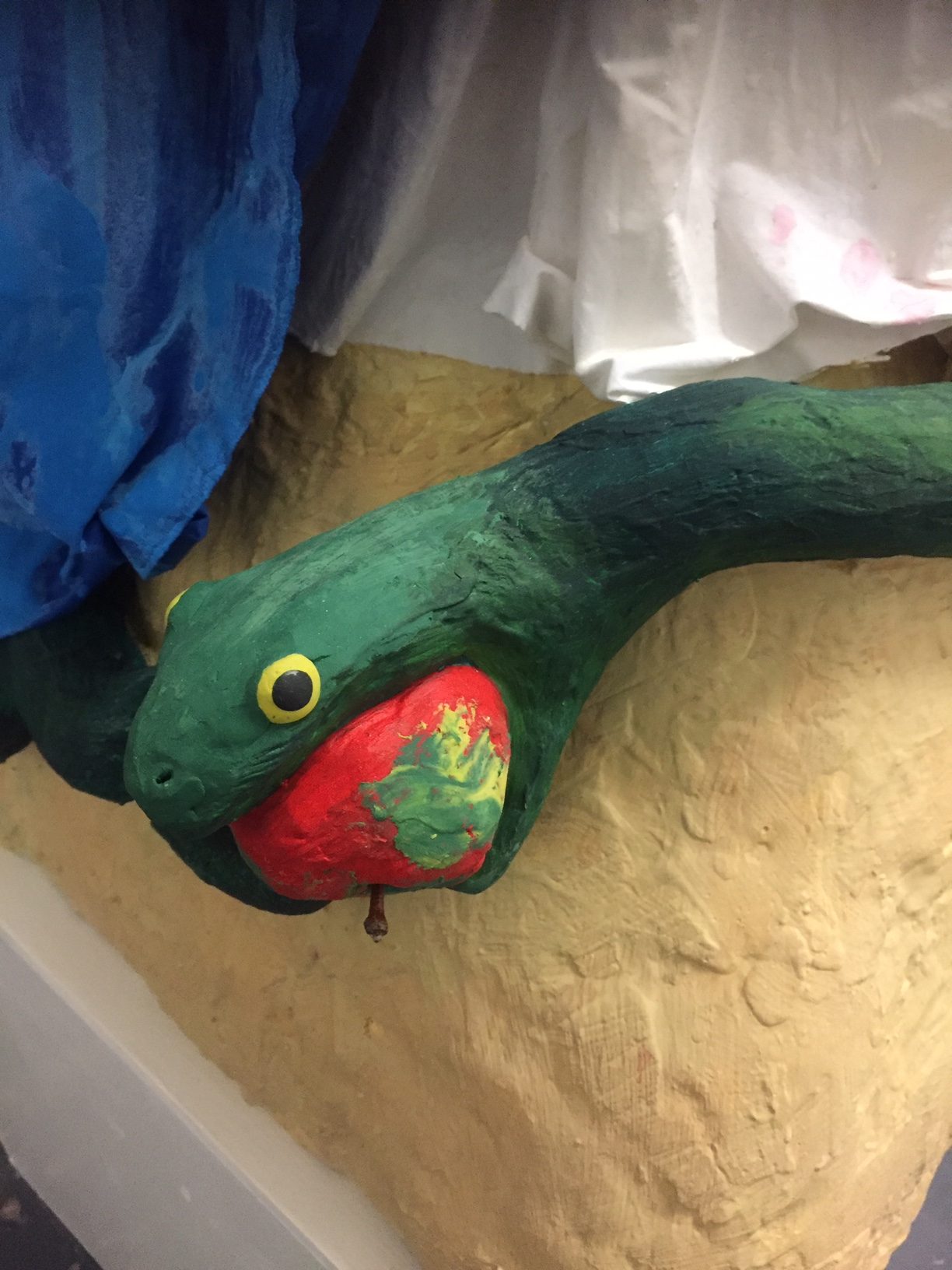 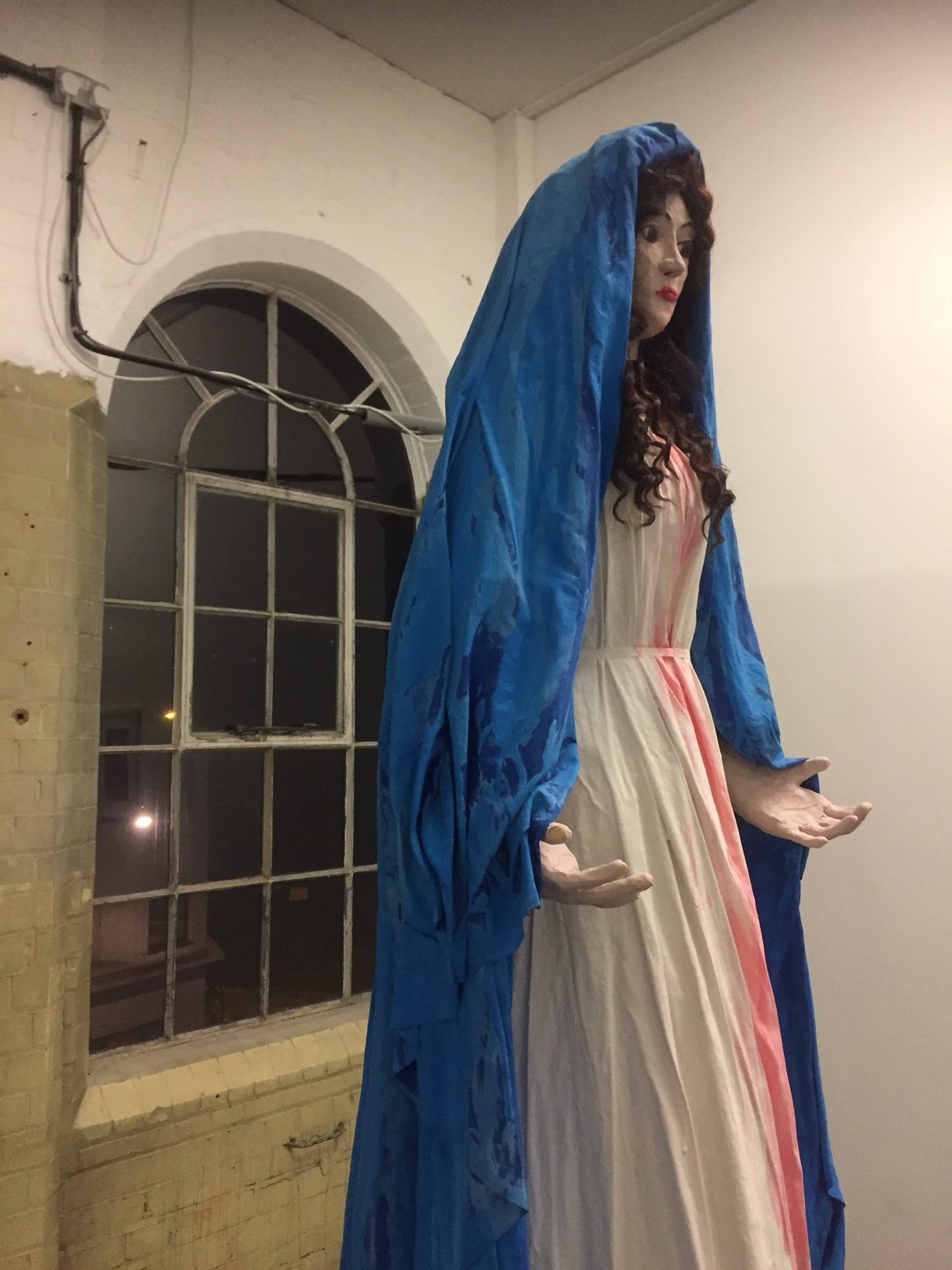 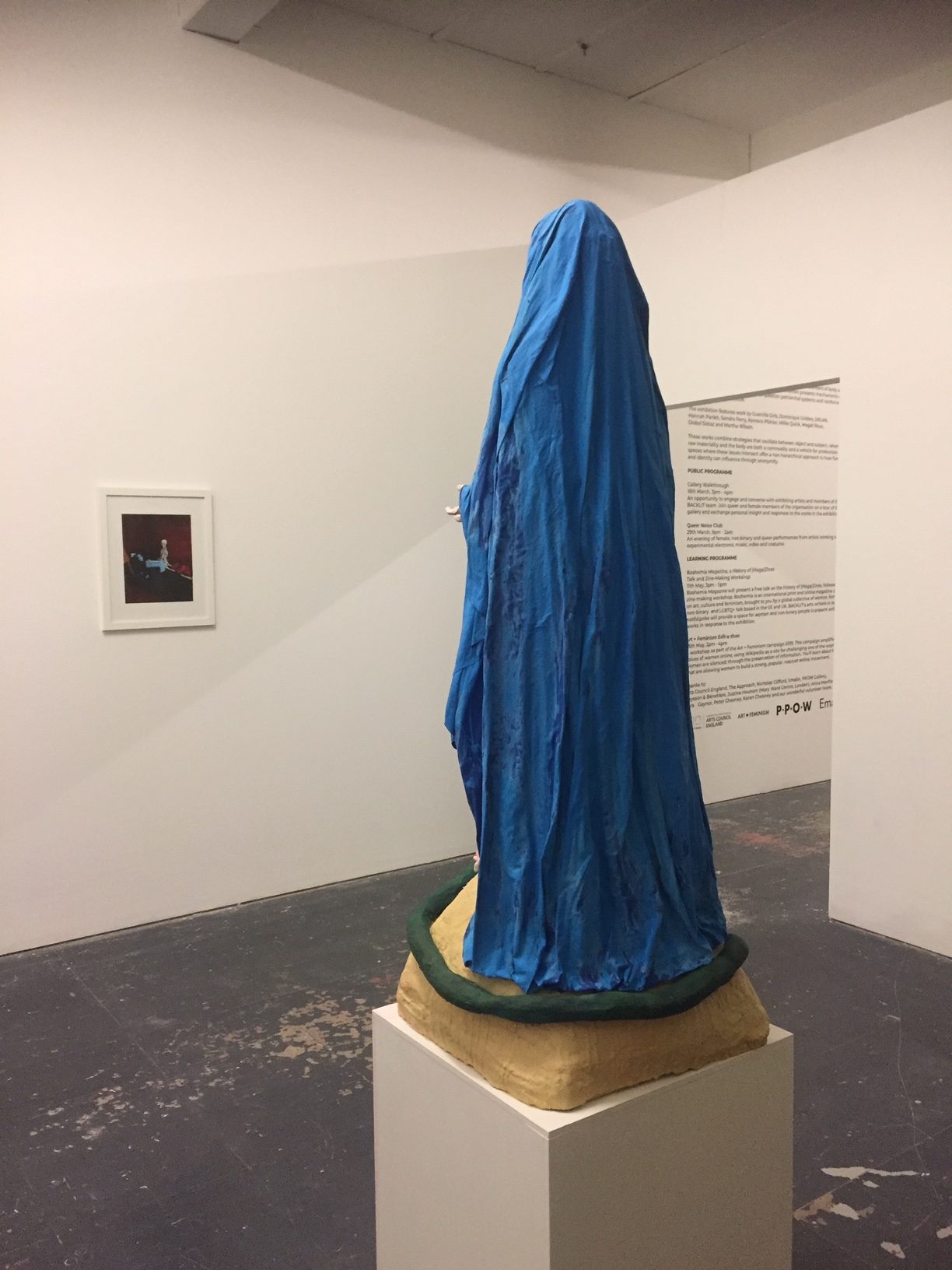 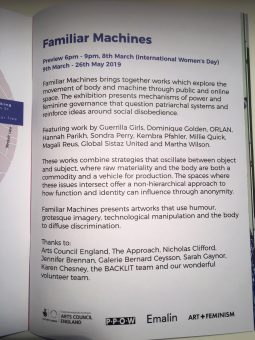 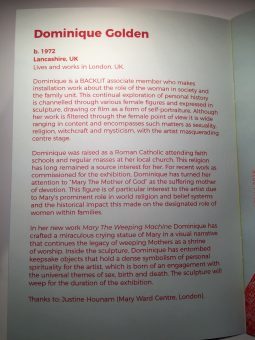 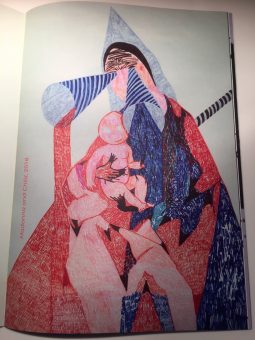 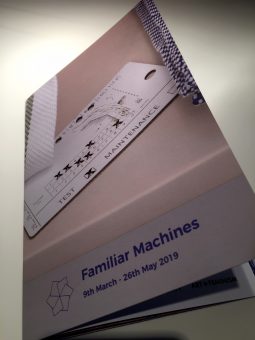 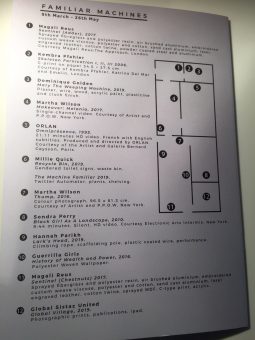 The Making of Mary The Weeping Machine 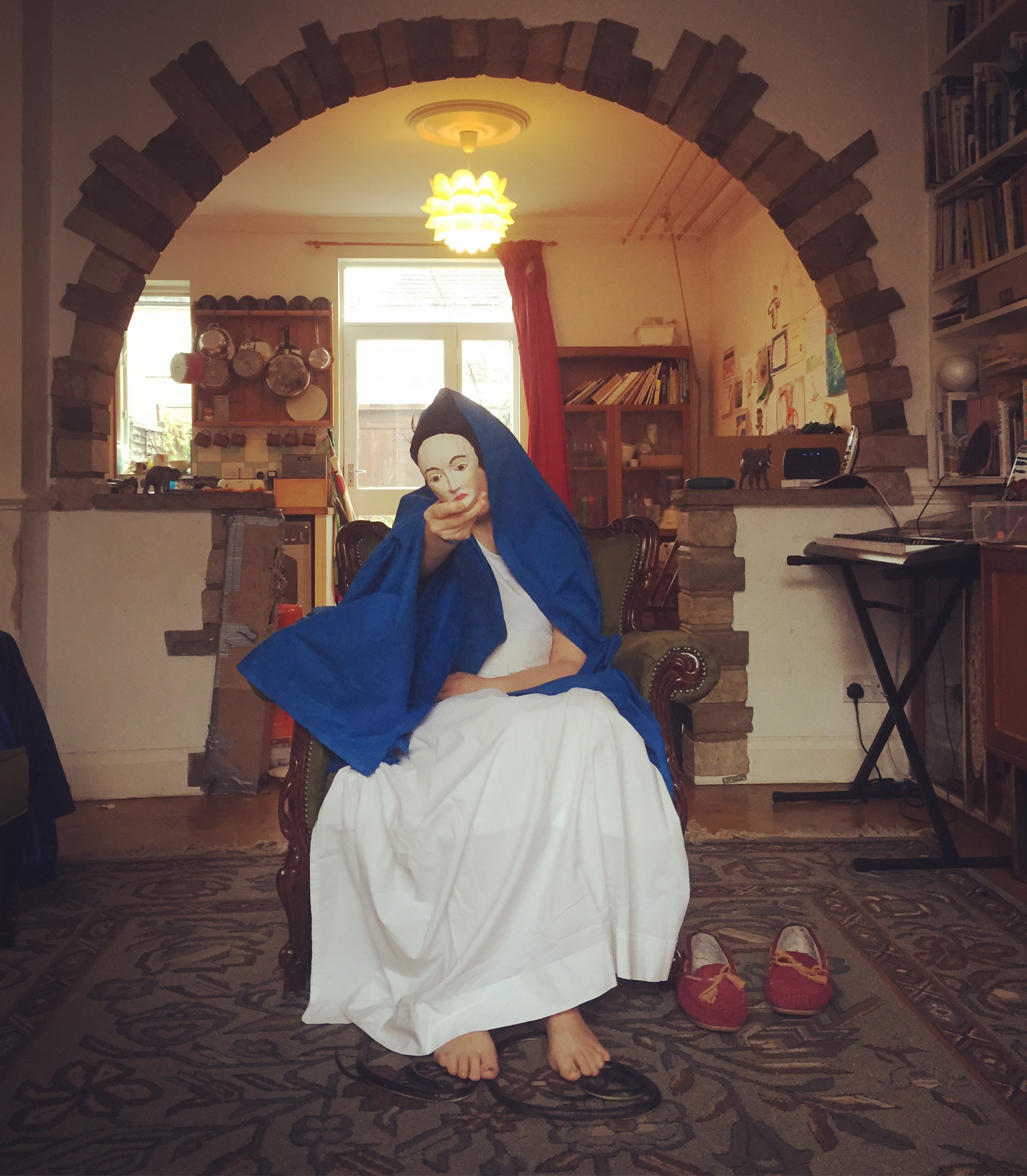 Dominique makes installation work about the role of the woman in society and the family unit by a continual exploration of personal history channelled through various female figures. Whether expressed in sculpture, drawing or film the works are a form of self-portraiture. In order to create the works the artist employs automatic techniques to achieve a surrealist quality of style, (such as working with found objects that resemble another form or incorporating mistakes into the process of creating.) Her work is filtered through the female point of view but is wide ranging in content. it encompasses such matters as sexuality, religion, witchcraft and mysticism with the artist masquerading centre stage.

Catholic religion has long remained a source interest for Dominique. She was raised Roman Catholic; attended faith schools and regular masses at her local church. For recent work as commissioned by BACKlit Dominique has turned her attention to Mary The Mother of God.

The suffering mother of devotion is of particular interest to the artist due to Mary’s prominent role in world religion and her position in the holy family unit. Mary’s identity is born from motherhood and this has cemented belief systems for future generations of women in families. There is still widespread expectation that mothers will provide for the children’s emotional needs and her identity will stay within the domestic threshold. Whilst male status will exist primarily in a place of work.

In Mary The Mother of God Dominique has crafted the statue of Mary in a visual narrative that continues the legacy of weeping Mothers as a shrine of worship. The figure of Mary reminds us as Mothers to suffer for our children. Inside Mary Dominique has entombed keepsake objects such as a broken glass from her late Auntie Hilda. The objects hold a dense symbolism of personal spirituality for the artist which is born of an engagement with the universal themes of sex, birth and death.

Miracles just like this happen all over the world and this exhibit is no different. When a weeping statue appears the location becomes a sacred place of worship. This is because visitors think magically around the figure and imbue it with personal meaning. Mary The Mother of God is the first miracle of this kind to exist at BACKlit and we as the viewer are all part of the miracle. 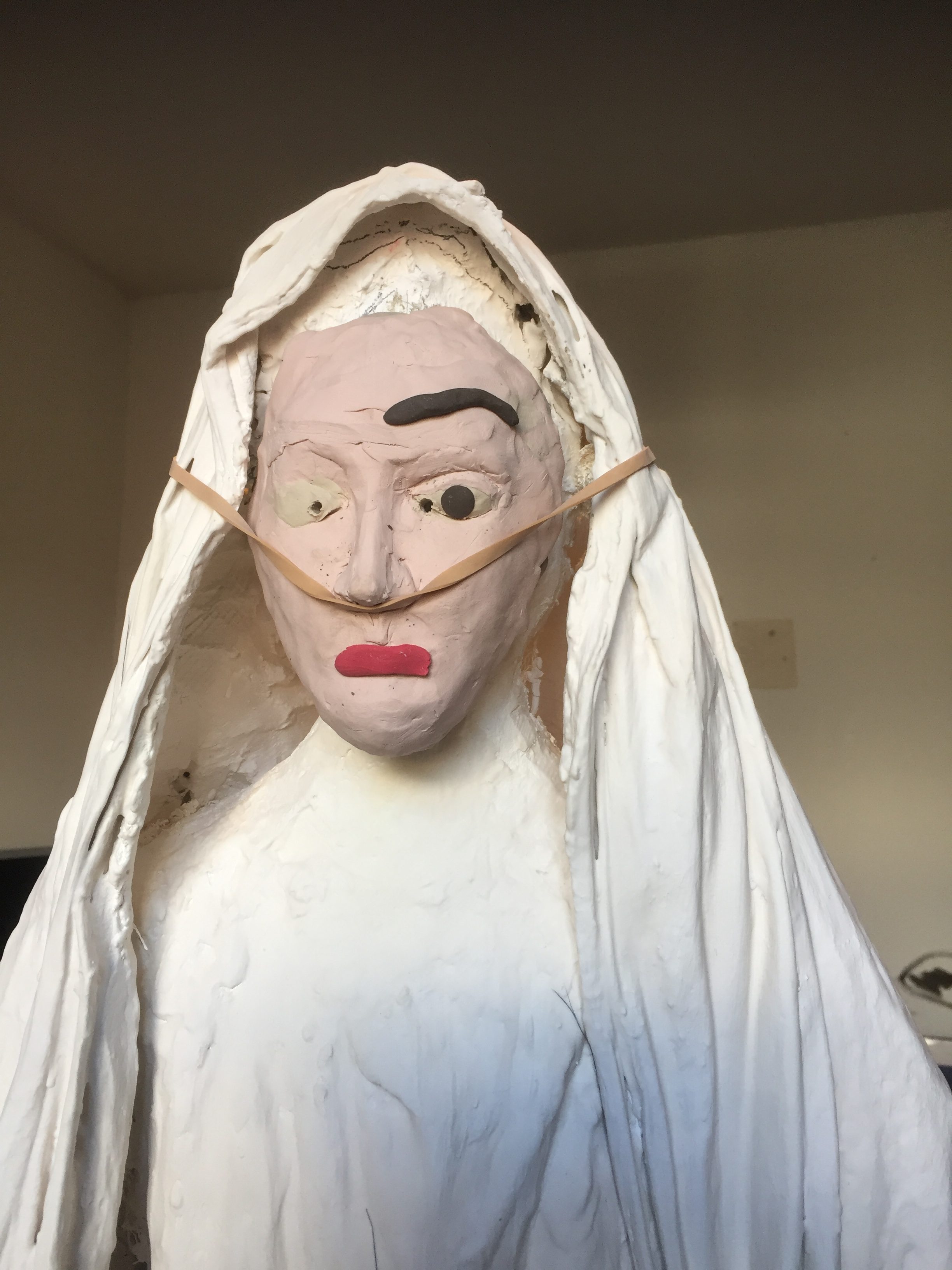 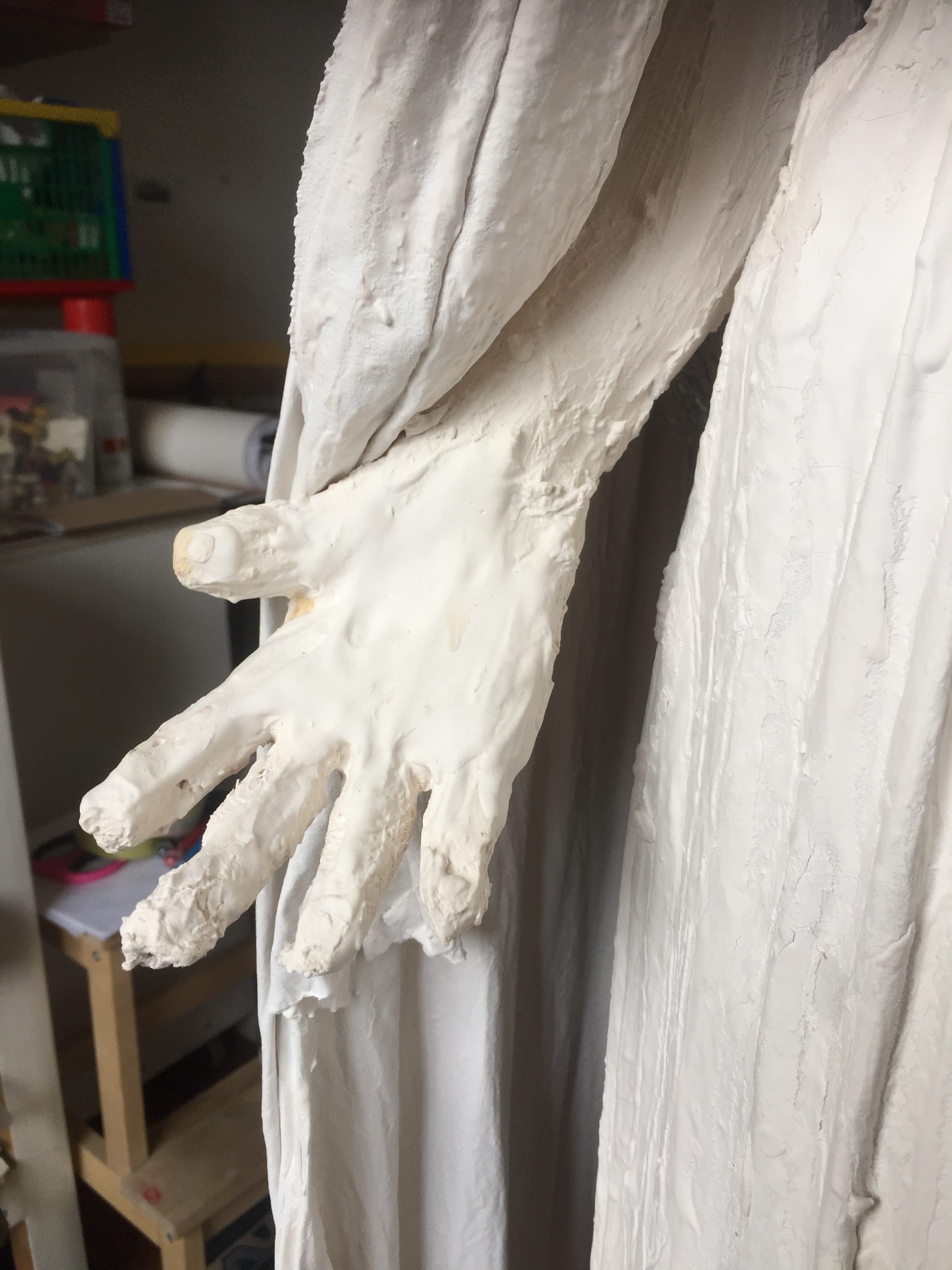 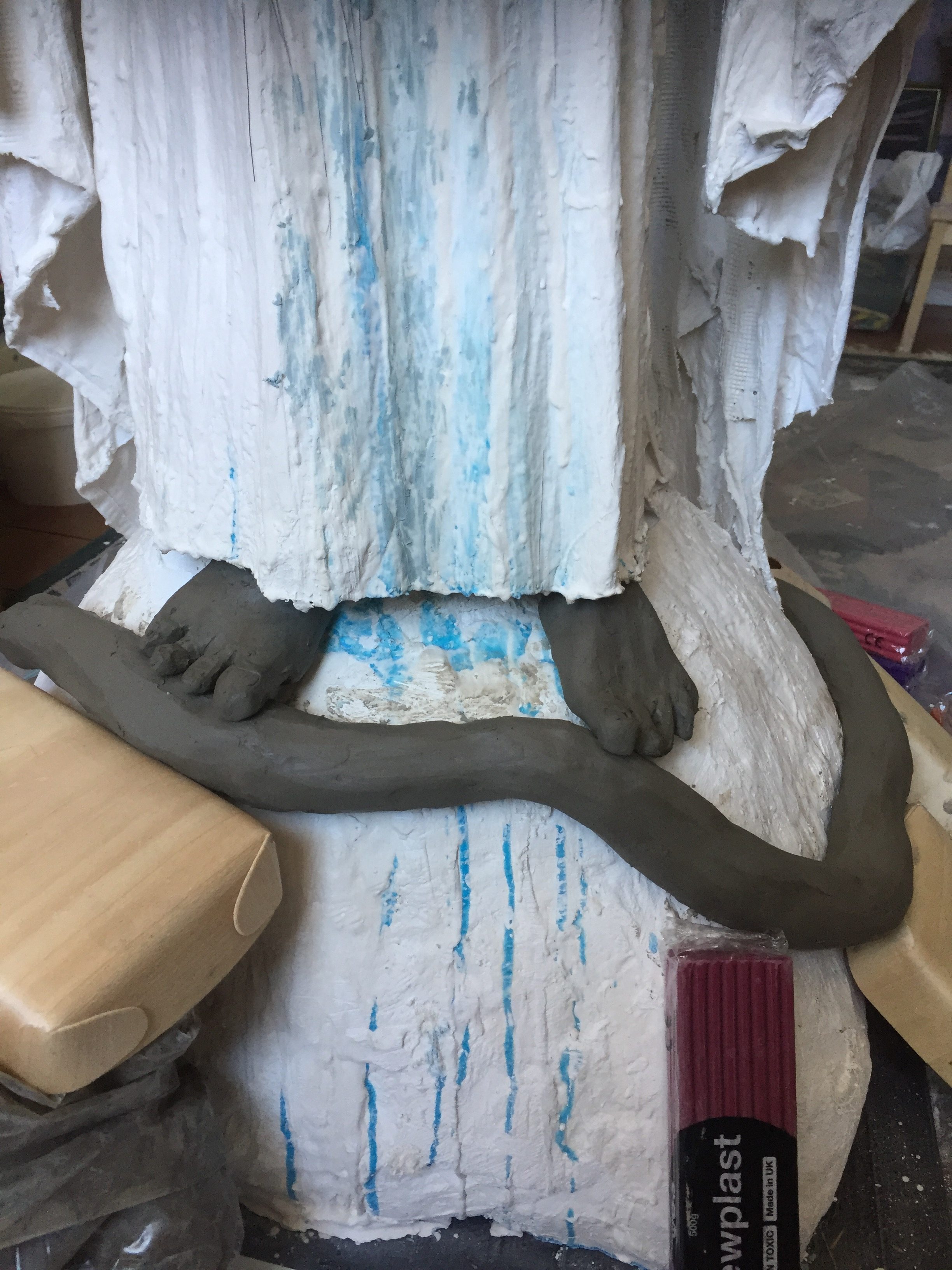 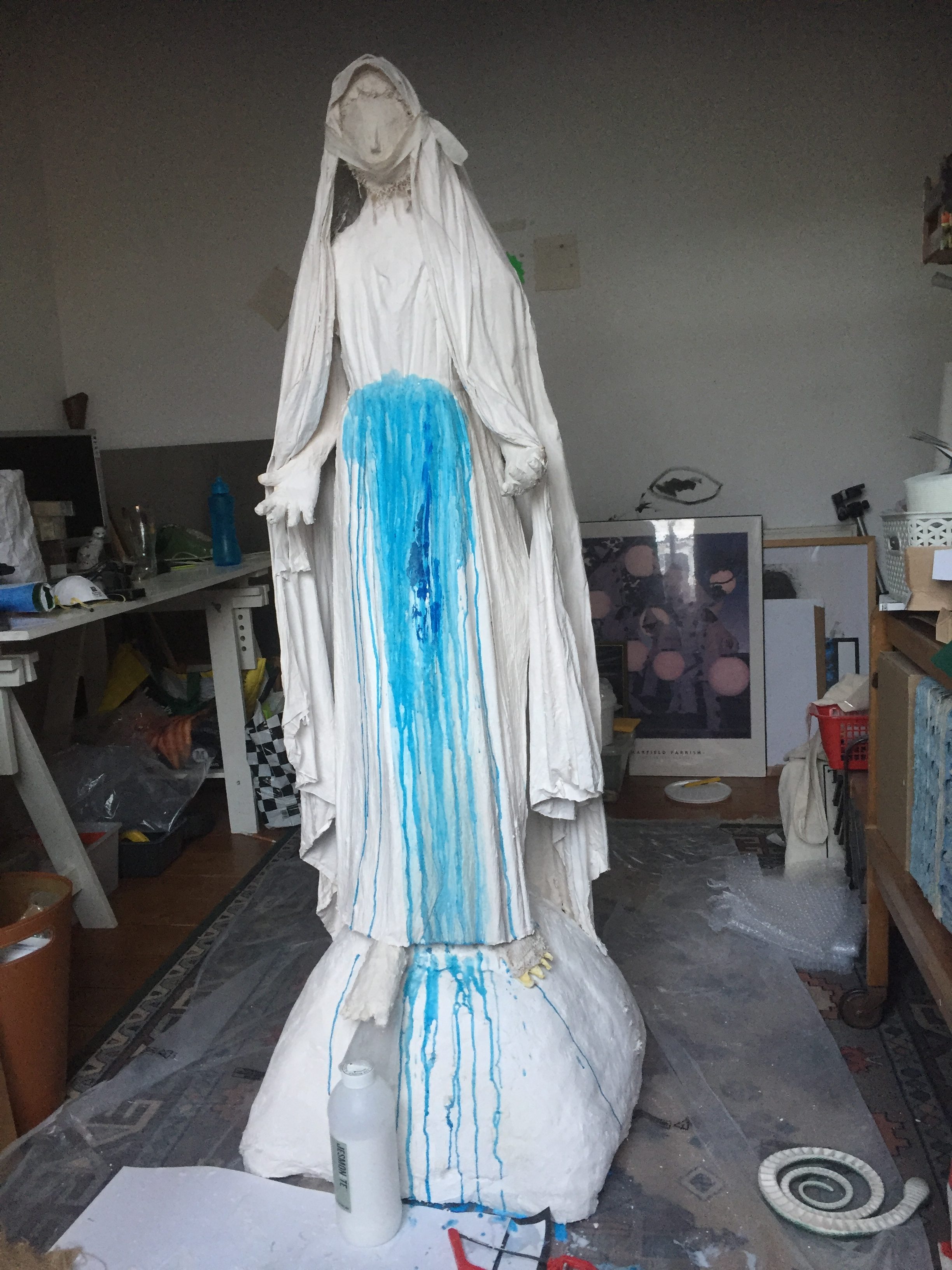 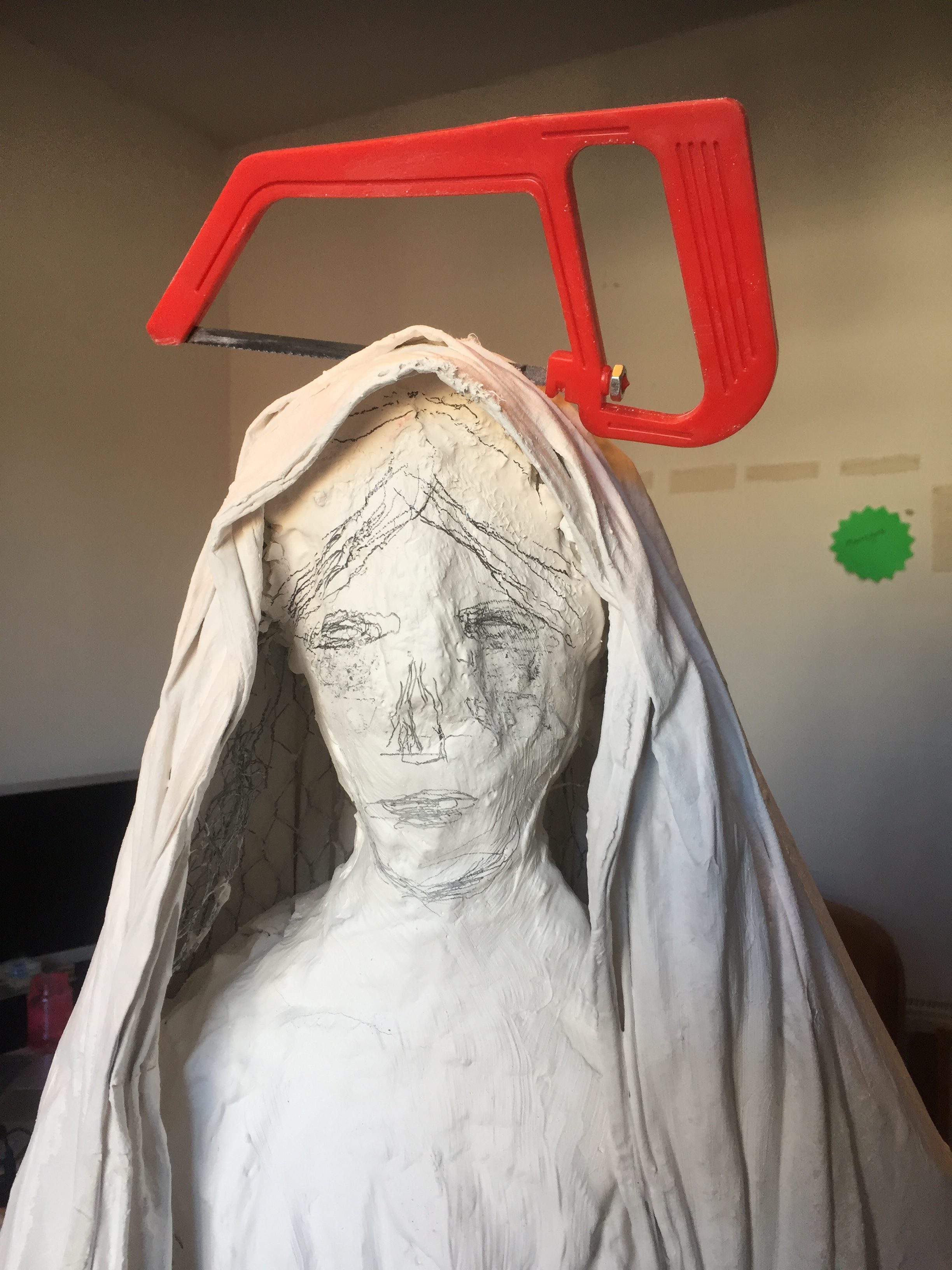 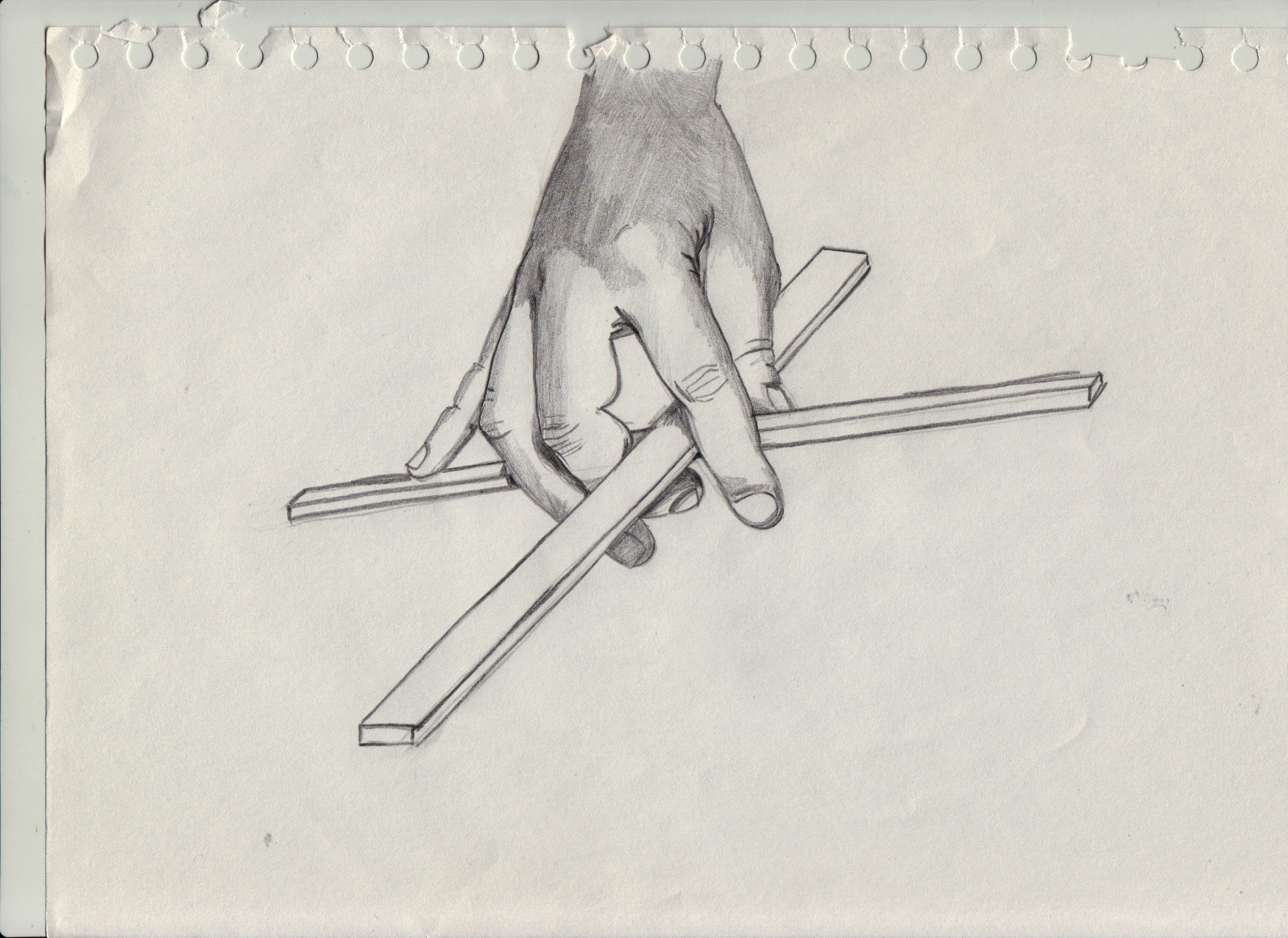 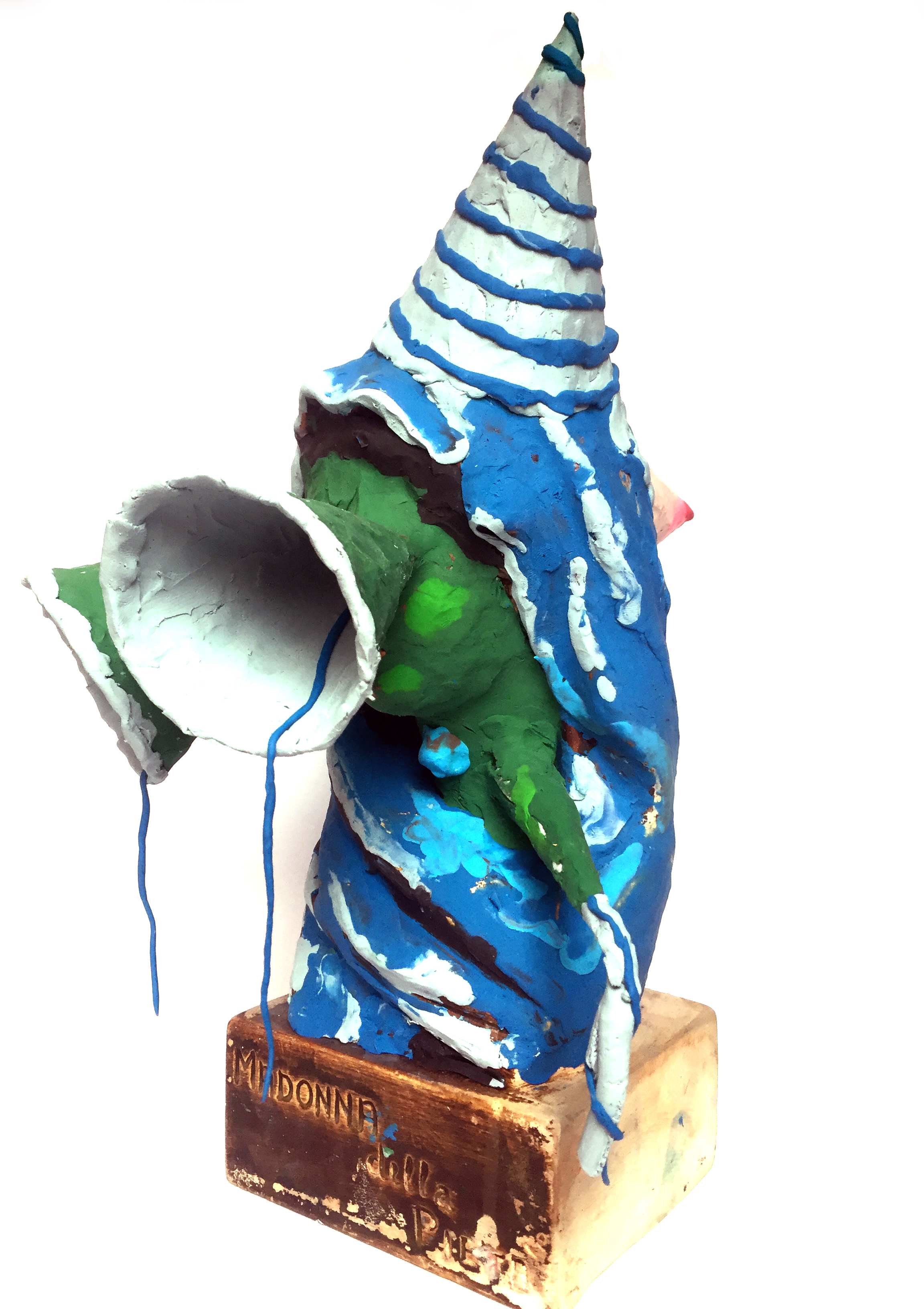 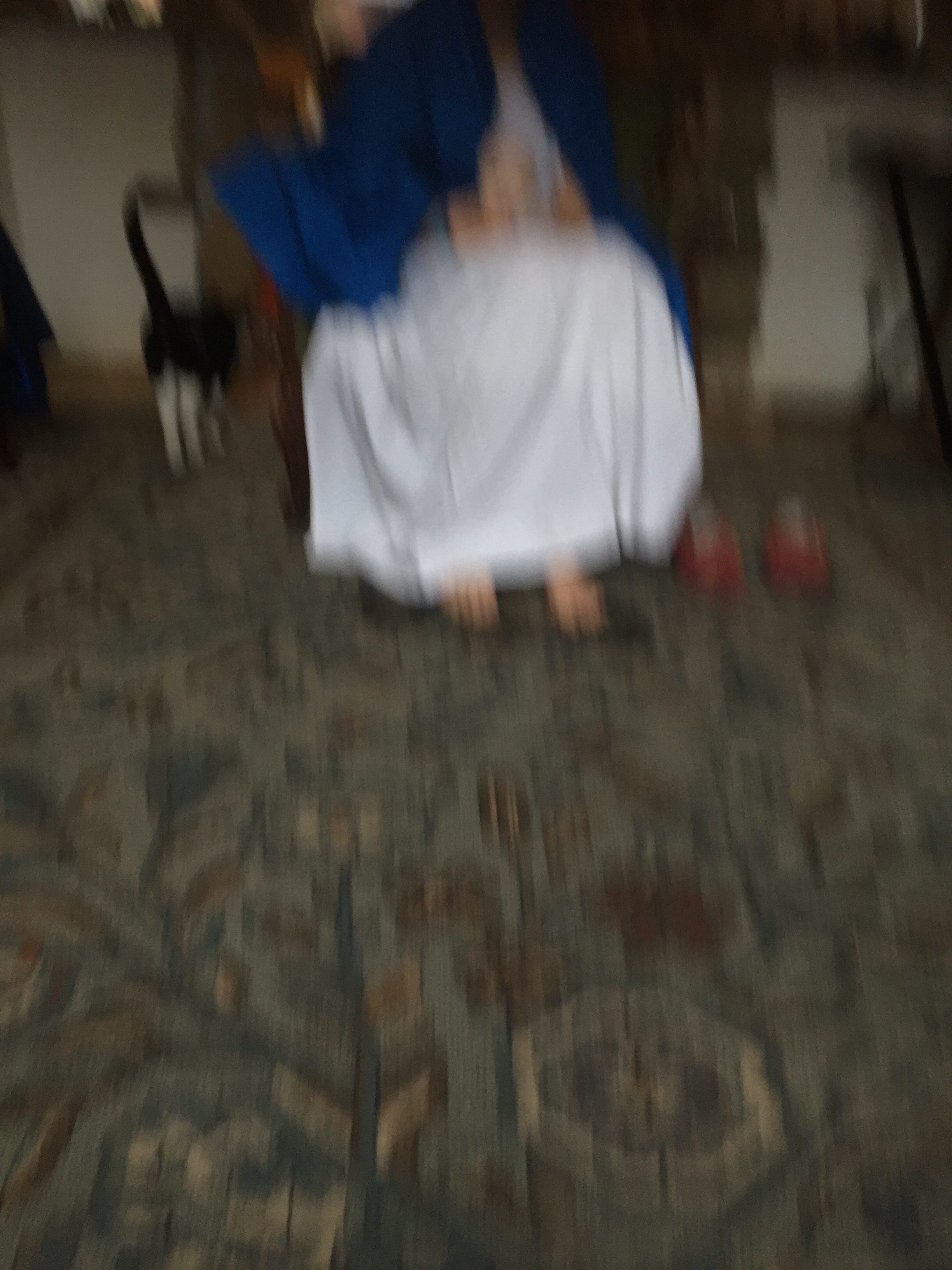 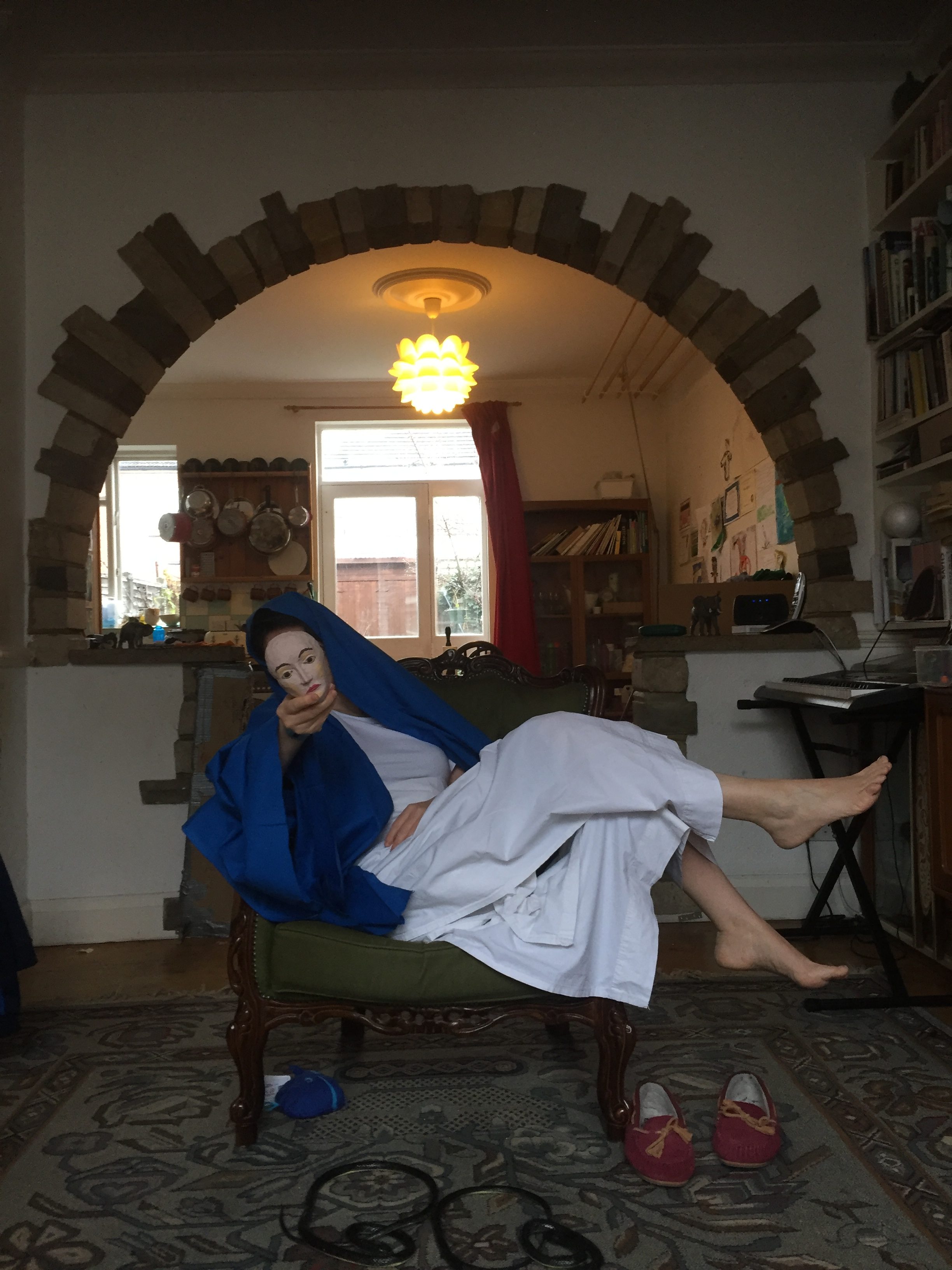 Installation – record player with moving sculpture
Disremembering the past – times arrow – what is done cannot be undone – all we have from the past
is memory.
History is written and neatened up so that the main characters are the main feature and supportive
roles are side-lined. Our collective memory is down to a historic selection process and we carry on
the mantle of remembering and forgetting directed by whatever media coverage is available for
news worthy items.
The mother of Jesus Christ was a virgin mother who witnessed her son’s controversial death wish
behaviour such as that of a person with mental health suffering; ultimately summarising in his
crucifixtion at the age of 38 years old; a man in his prime.
Mary introduces Jesus to the world. We don’t know much about her apart from that she is ‘pure’; a
blank sheet by which her son Jesus can write all over; his doing is her pain. She only presently exists
in hearts and minds because of the strong glare of celebrity light Jesus cast upon everyone who he
was connected with. Yet as his mother, did she not shape him as he went on to shape her?
I would like to make ‘Mary the crying machine’; as Jesus made Mary into the crying machine. The
mother is in pain and exists only in one dimension; to cry for her son.
I will use an existing religious figurine and affect it by applying an outer shell. This is in order to work
on something that exists in the world and for the object to carry on its life with a different lease of
energy. The affected figurine (or Mary the crying machine) will be part of an installation which will
include a bucket (for catching tears) and moving parts.
As part of the installation Nicholas Clifford will assist by creating a vinyl record which will incorporate
the sound of mothers crying. The motion of the record also lends itself to time moving forwards
only. The length of time of the record is visible on the turn table. What is done cannot be undone;
what is heard cannot be unheard.
To accompany the installation I will create written work on the concept of Mary the crying machine/
Mary the forgotten mother and how entropy (times arrow) does not afford a situation such as the
death of a loved one to change. I would also like to perform a spoken word/poetry set as part of the
opening night celebration (or as a timetabled fixture as part of the overall event). 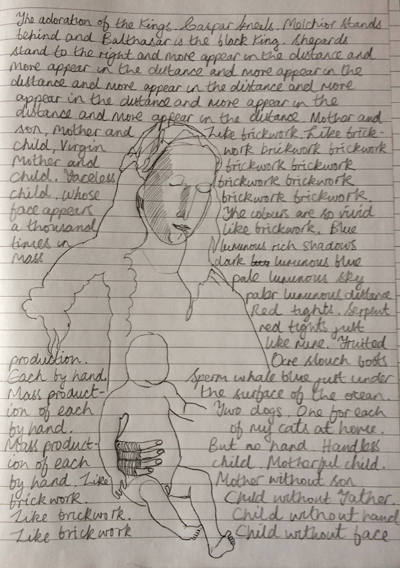 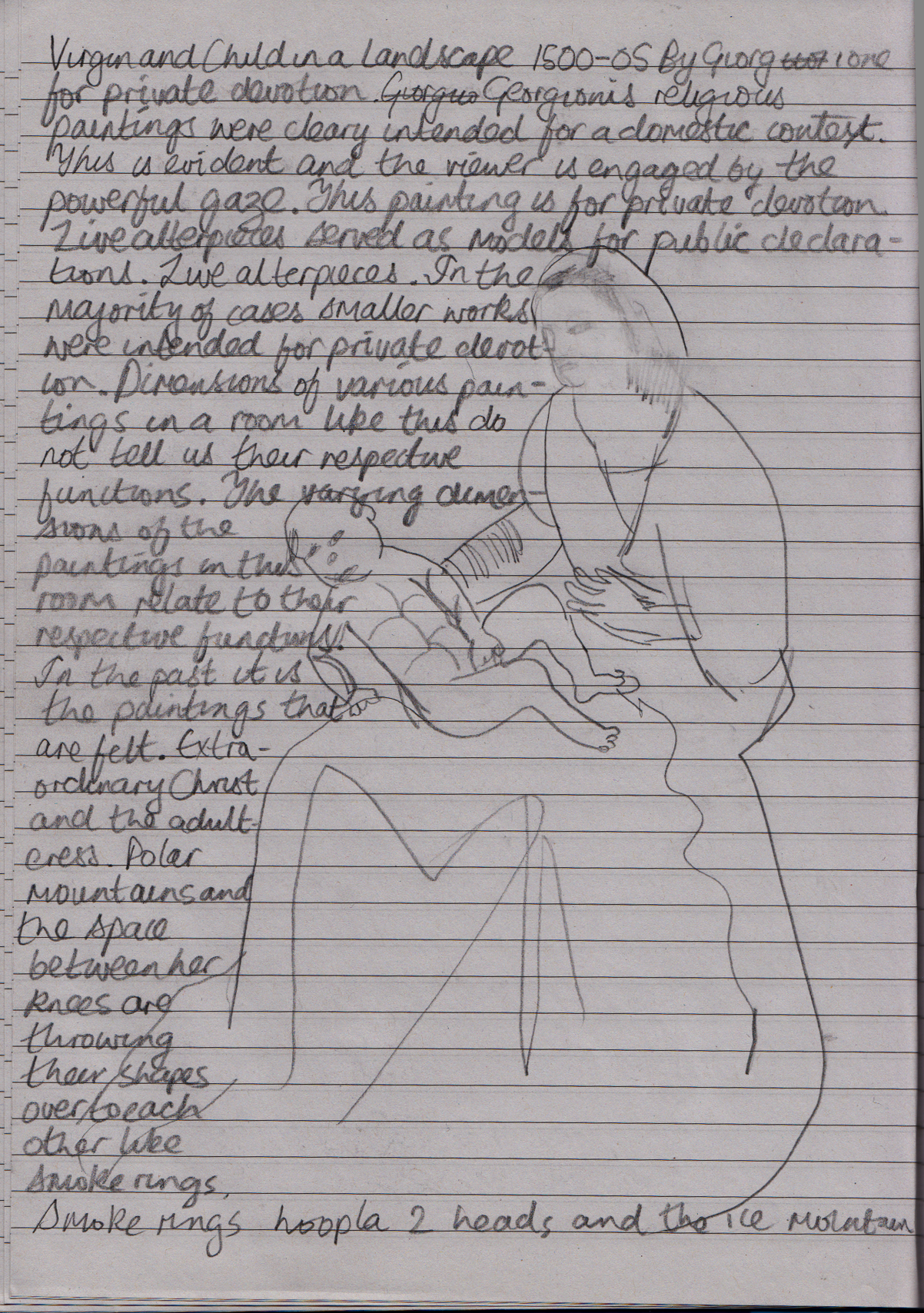 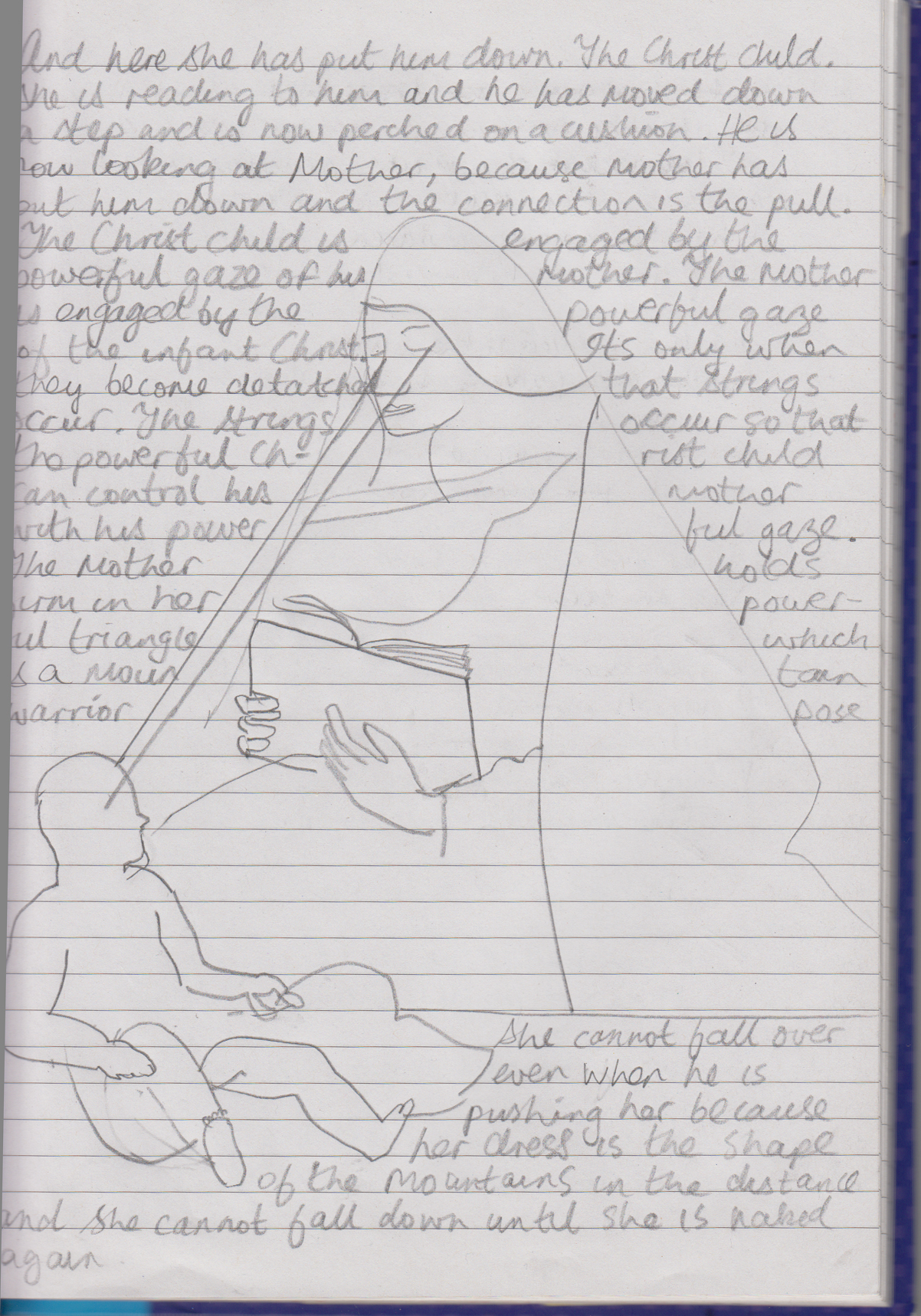 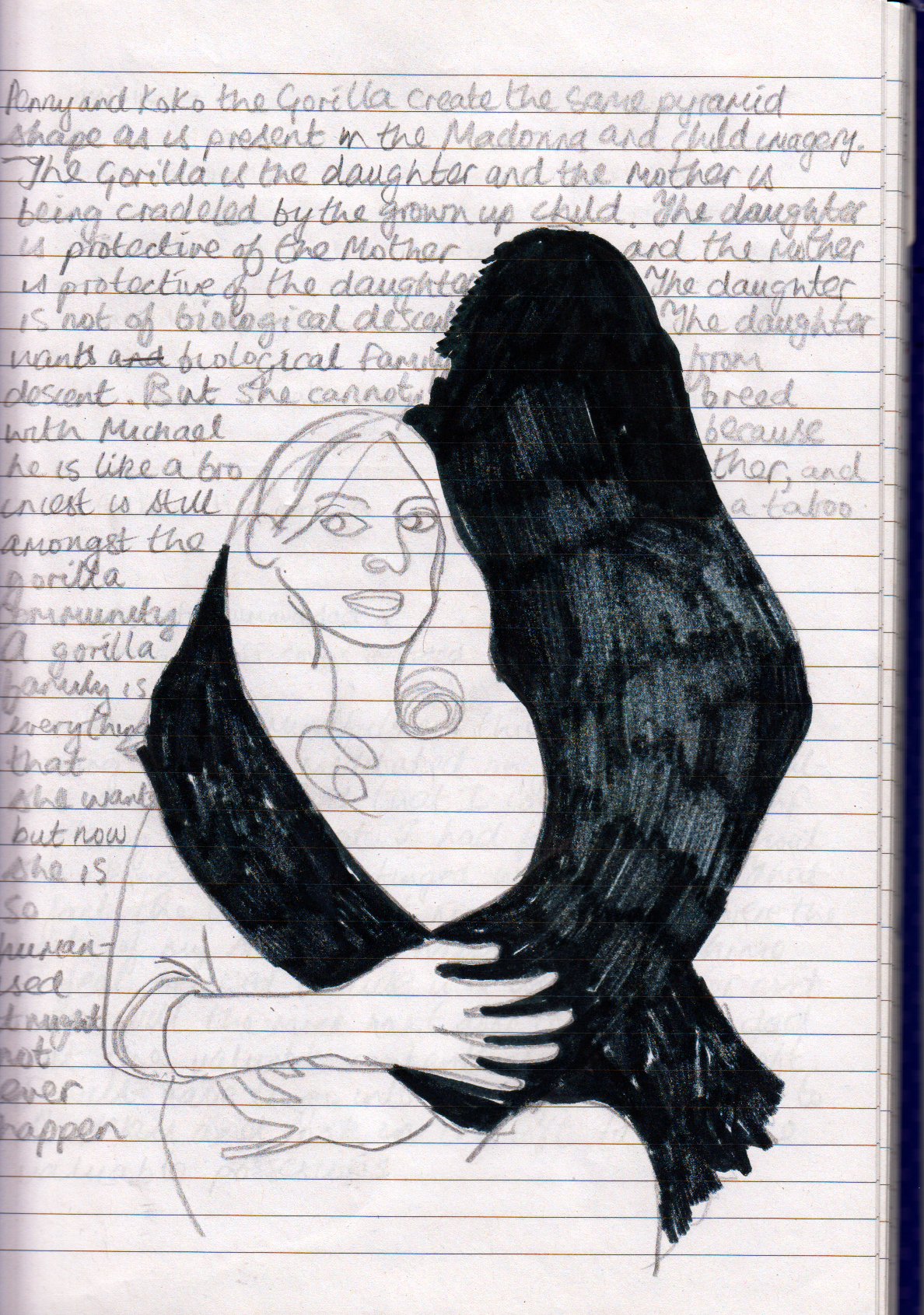