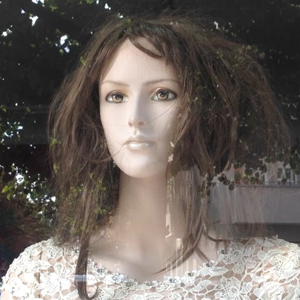 Julia of Norwich was made with funding and support from ACE and BACKLIT Notts – Thank you!!

Female bodies were perceived as broken in medieval times because they leaked. Therefore, women were absent when it came to structuring society. Julian of Norwich was an anchoress in the 13th century and the first woman to write a book in English, which she wrote in secret. It was about her visions and commune with Christ, as a woman she was able to form a close alliance with Christ via bodily fluids. Christ’s crucifixion weeping wounds and Julian’s tears connected and made common ground, she was able to get close to God via her feminine leakage.

Dominique’s animation demonstrates crying in multiple abstractions and in doing so demonstrates the flexible, magical and watery attributes of the positive feminine body. Dominique was awarded an arts council grant for the making of this work – which was supported by Suzanne Golden (BACKLIT Deputy Director), Hetta Howes (Medieval historian), Hilke Kurkze (Feminist theologian). The soundtrack was created by Nicholas Clifford and features Sally Child on the walophone.
Dominique conducted workshops at BACKLIT Gallery, Greenleaf Primary school, and Blackhorse Road Studios to inform the creation of ‘Julian of Norwich.’
(copyright Dominique Golden 2021)

This video was the inspiration for the spoken word response scripts and flash cards which we used during the Tate Exchange Programme.

We live in North East London and travel on the M11 – A52 to Nottingham regulary to visit family. The roads at night are mesmeric with lights. I created the film on route and later performed live reaction poetry to the film images.